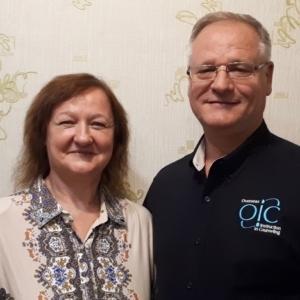 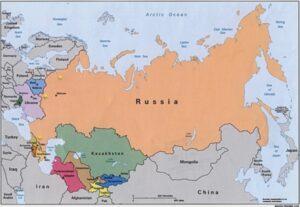 In February 2015, Wayne invited us to become a part of OIC. We do not consider ourselves very capable and talented. We really need God’s help and His wisdom.

We have a dream, if God is willing, that the ministry of Biblical Counseling would grow in Russia to such an extent that, after while there will be an organized Association of Biblical Counselors of Russia. It is a great honor for us to be part of the OIC team!

We are currently teaching the Church Leadership Training program modules in Vladikavkaz, Vologda, Bryansk, and Yakutsk, Russia. Vladikavkaz is a city in the North Ossetia region of southern Russia. Our Lord has given us a great group of people eager to learn in this very interesting part of our country. Please pray with us that God will bless these ministries.

I was born into a large Christian family, we had five sons. I, Stepan, was the youngest of sons. My parents, being evangelical Baptist Christians, took their children to church from childhood. Of course, I was, like all the children who came to this world, a sinner and led a double life.

As a teenager, I sang in the choir and played the guitar in a string orchestra. But unfortunately, there was not a single person in the church who was really interested in my heart. There were no people who would ask me: “Stepan, why are you singing? What do you like about the church? Do you know God? Etc.”No one knew about my life and what was my true value.

But I still read the Bible and once I clearly realized that I was a very big sinner. I realized that Christ died for my sins, and I need to be reconciled with Him. It may be strange, but it’s hard for me to say the exact date when I was born again. But this happened before the moment I was called up for military service in the Soviet army.

When I was about 15 years old, I read a book that made a strong impression on me. It was about five missionaries who died in the Auca tribe, one of whom was Jim Elliot. Then I prayed: “Lord, if you want, someday bring me to the Nenets (people in the north of Russia) so that I can learn their language and preach to them about You.” God heard my prayer, and he prepared me for a trip to the north for 10 years. But God did not lead me to the Nenets, but to the Yakuts.

I remember when I was a young man, I sincerely prayed to God, saying: “Lord, I want to help other believers in their lives.” I did not even realize what I was praying for. But God heard this prayer …

During military service in the Soviet army, then I was already a believer, there were many difficulties, but God performed miracles in my life. He used all kinds of people and circumstances to change my heart. March 26, 1991, a few days before my discharge from the army, during another training session in the gym, I received a very serious injury. This event completely changed the course of my life. Otherwise, my life would be completely different.

In 1992, I married a wonderful woman, Natasha. She grew up in a family of unbelievers, was a member of the Communist Party. Since childhood, she heard a lot about God from her aunt. She often visited her and watched how God radically changed the life of her aunt, her husband and the whole family. One day, Natasha came to worship in a village church, where she heard a sermon that Christ died for sinners and that he now offers this forgiveness to all people. Natasha, being at that time a twelve-year-old child, clearly understood that she was a sinner, but that day she left worship services unforgiven.

Years passed, Natasha graduated from the energy technical school and worked in the city of Tver at a design institute. She began to search for believers in this city, and one day she found a house of prayer where believers gathered. Listening to the preaching of God’s Word, she lamented greatly, cried, realizing that she was a great sinner. That day, she left the house of prayer, forgiven and joyful, because God gave her a new birth. Since then, her life has completely changed and from the day of our wedding until today, we serve our God together.

In 1996, my family moved to Donetsk (Ukraine), where I became a student at DHU (Donetsk Christian University). At that time, we had two young children: a son, Stepan, and a daughter, Anna. After graduation, the Lord called us to missionary work in Yakutia (the northern region of Russia). Four months later, after we moved there, on Christmas Eve, my wife gave birth to a third child – our daughter, Angelina. I was a missionary pastor, and Natasha worked at a Sunday school in a church, and also was a teacher of Christian ethics at a public gymnasium.

In 2001, we returned to Ukraine. I began to study at the Kyiv Theological Seminary on theology. After graduating in 2004, we received an invitation to serve in the city of Ulyanovsk (Russia), where we still live. Here is a small church where I am their pastor.

Throughout my ministry from Yakutia to meeting Wayne and Suzy Vanderwier, I was constantly tormented by the fact that, in fact, I could not provide serious pastoral help to believers. Even worse than being able to give biblical answers, I was not familiar with biblical counseling. Of course, in Yakutia, God did a lot for us and through us, but there was a serious gap in the issue of biblical counseling.

Before I met Wayne, I went through several Christian education schools, one of which I received a master’s degree. Everywhere, when I studied counseling, it was an integrated psychology. As a pastor in Yakutia and then in Ulyanovsk, I felt a great need to solve my inner feelings, as well as help other believers to solve their heart problems. There was no one to help me in this matter. However, by the great mercy of God, in 2008 I attended a modular program of biblical counselors. 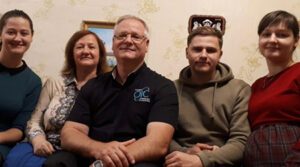 Sometimes my children also teach me. Once, I was driving a car, and my wife asked me to slow down. I must confess that it touched my pride so I expressed my dissatisfaction with my wife’s request. Suddenly, my youngest daughter, who was in the backseat, said to me: “Dad, the problem is not the problem, the problem is in your heart.” I knew it, I taught it in college and church, but her words rang with me. I slowed down and asked my wife and children to forgive me. God is working on me.

After graduating from the master’s program in Biblical Counseling at Kyiv Theological Seminary, I constantly was concerned about how to spread Biblical Counseling throughout Russia. I saw how the Lord has changed our church, when I began to teach the Biblical ways to the solution of all spiritual matters. However, I also saw how psychology seeps into churches under the guise of a wide variety of “healing programs”. My passionate desire and prayer is that all the churches in Russia would return to faith in the sufficiency of Scripture and realize that the children of God, in fact, have everything needed for life and godliness (2 Peter 1:3) and that the ministry of counseling is a ministry for every Christian.

“…what you have heard from me in the presence of many witnesses entrust to faithful men, who will be able to teach others also.”

You can also hear biblical counseling stories and testimonies from around the world at the BC Worldwide podcast hosted by OIC. Subscribe here: